Recently, as a member of the NAWCC and Chapter 159, I came across an article by Ken Johnston in the NAWCC’s ‘British Horology Times’ Number 50.  The article was published in May 2010. 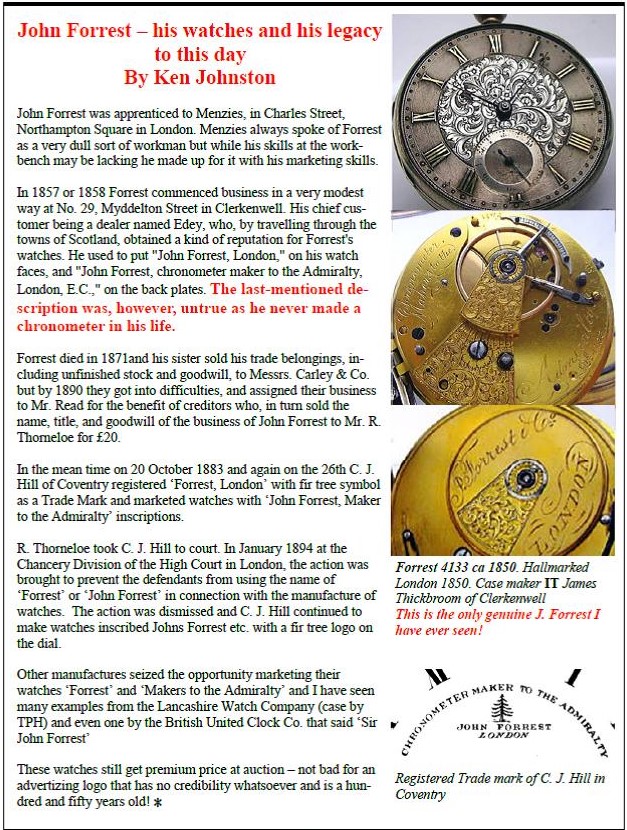 Article above reproduced here with kind permission of Ken Johnston and the NAWCC.

Knowing I had access to LWC watches bearing the John Forrest name I decided to research ‘John Forrest’ a bit further, which included a series of emails between Ken Johnston and myself.

Articles about John Forrest and his watches have appeared in

January 1863 Horological Journal – describing his display of 76 watch specimens in the International Exhibition of 1862.

March 1894 Horological Journal – a follow up letter from W. B. Crisp, a respected horologist of the day, which stated

“…Forty years ago a watch of his make was put into my hands for my opinion, as bearing the name of John Forrest, maker to the Admiralty. My remarks were, Forrest is no “maker to the Admiralty” at all, and his name never appeared on the Greenwich lists, and he never made a chronometer in his life.”…“It is a thing thoroughly understood in the trade that, to be a maker to the Admiralty, a maker must sub­mit chronometers or watches for test, or on trial for purchase, at the Royal Observatory, Greenwich, under such restrictions as the Astronomer Royal may suggest from time to time. But, Mr. Editor, I am bound to say that John Forrest was not the only manufacturer in Clerkenwell anxious to obtain this distinction without going through the ordeal of depositing chronometers at Greenwich, and succeeding in the sale of them. W. B. Crisp.”

August 1990 Horological Journal – an article ‘John Forrest, Chronometer Maker to the Admiralty’: The Forgery of Victorian Watches’ by David J. Boullin.  In the article he brings together many of the facts, then makes the statement ‘The story of the forgery of the name ‘John Forrest’ is complicated but I will simplify it: Forgery did not commence until after he died in 1871”

October 1990 Horological Journal in the correspondence, ‘A. Taylerson’ ‘gives the pot a stir’ and raises further queries relevant to the whole story.

Whilst I am certain to have missed more articles/correspondence on this topic, I can give some information on the basis of watches I have seen.

Below are details of a sample of LWC watches which have ‘John Forrest’ on the dial, for which I have looked up their entries  in the LWC ledgers.

So….the LWC took an order from a retailer; the retailer must have asked for the dial to bear the John Forrest name and logo, and in some cases the movement was also marked with ‘John Forrest’.

It becomes a moot point as to whether LWC was marketing them to the retailer or responding to the request from the retailer.  In either case, the LWC was fully complicit in continuing the use of this ‘premium’ trademark.