Welcome, and note the link above the map which outlines changes made to the website.

This website was set up in the latter half of 2016 primarily to showcase my new book on the Lancashire Watch Company (LWC).  I added a section to document information about the LWC which I keep discovering since my book was published, and which I might have included in my book had I known it at the time of writing.  And given the inextricable relationship with the LWC and Prescot, I have also added a section on watches which were not made by LWC but have ‘Prescot’ on the movement.

By way of background:

LWC was a large watch factory which opened in 1889 in Prescot, Lancashire, England, United Kingdom.  It made pocket watches, primarily for the UK market but it did sell to other countries.

It was the largest watch making factory in the UK at the time and produced somewhere just under a million pocket watches during its life.

Employees were notified about its closure in January 1911 and a nine day auction was held in March that year to dispose of its tools and fittings.

The story about the factory was told in 1973 by Ken Roberts Publishing Company – The Lancashire Watch Company Prescot Lancashire England’.   This publication included an essay by Alan Smith which documented the story of the factory and published one of its catalogues.  The publication also included an article by Henry G. Abbott entitled ‘The Lancashire Watch Company, Prescot, England’ which had been reprinted from the American Jeweler (Chicago) Volume XIII, 1893.  This paper was about the tools used within the factory.

Since then there have appeared various articles and correspondence about the factory in horological journals and other publications.

Spurred on by Alan Smith’s article, many years ago I began collecting LWC pocket watches and any other memorabilia I could find.  About four years ago I realised I had amassed a lot of material about the company so I decided I should document it for posterity.  The result is the book which is publicised on these pages.  Having written the book, as soon as you have left the keyboard, another piece of information comes to light so I decided I would add new material to this website.

Prior to the LWC, Prescot’s reputation for watchmaking was second to none.  So many watches made in the UK prior to the establishment of the LWC started their life in Prescot.  But while that is the case, relatively few watches prior to the LWC had ‘Prescot’ on the movement.  At some point during my research, I decided to keep notes of those I had seen and photograph them where possible.  The number of these watches/movements (i.e. there are movements which exist without their case) will run into hundreds, but it is low hundreds in my opinion.  Course I am hoping that this website will tease out many more from readers of the site.  I intend to use this site to document some of those known.  I also include examples from surrounding area e.g. Cronton, Tarbock, places which again housed many watch makers, but which are relatively hard to find.

A map of the area is shown below.  The map is a section of the large, circa 1883, Bacon’s County Map entitled “Lancashire – South Sheet”.  The map is divided into 5 mile squares so the reader can get some idea of the location of Prescot and its surrounding areas and their proximity to Liverpool.

In time I hope my book, together with this website, will become an important port of call for anyone seeking information about Prescot, the LWC and their pocket watches. 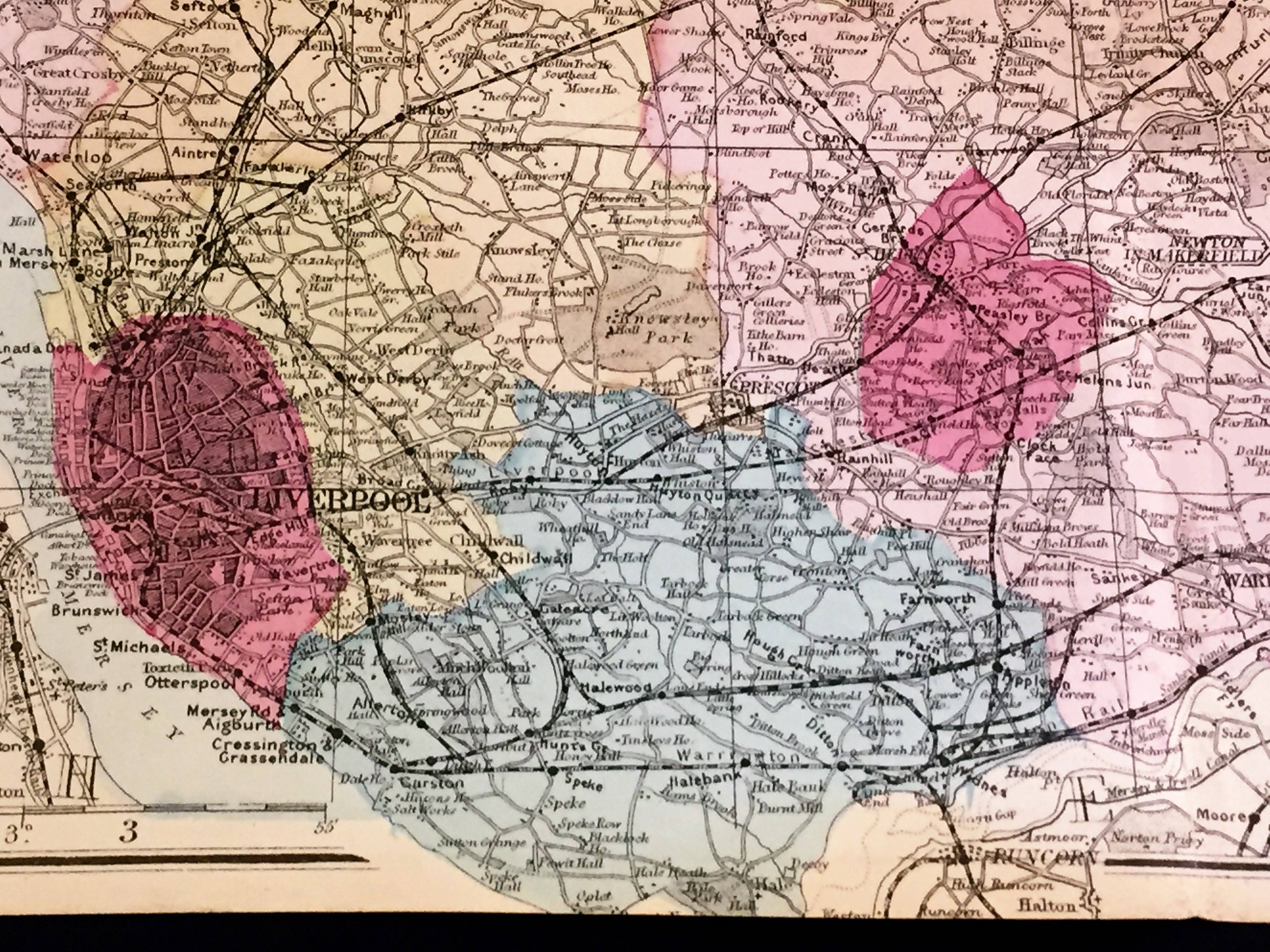